In response to the Weekly Photo Challenge.

This week’s photo challenge really hits the mark. I’m a sucker for everything grand, be it architecture, designs or gestures, and here’s my contribution. This photo was taken at Sheikh Zayed Masjid, Abu Dhabi. Enjoy! 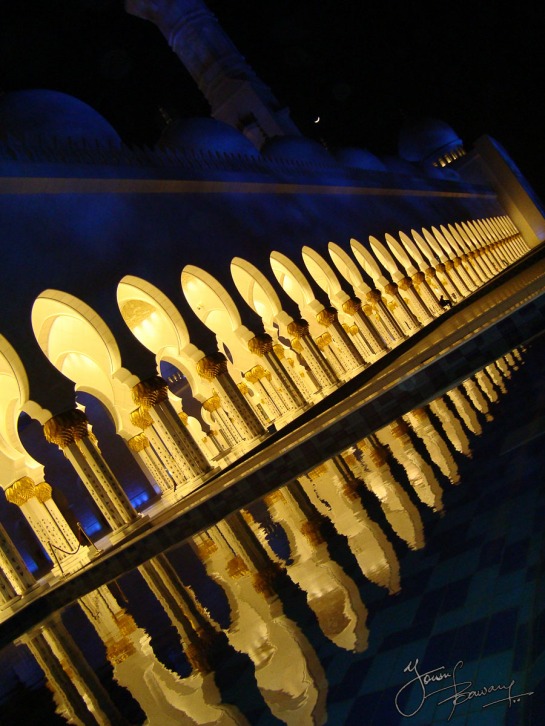 I had been waiting on the Abu Dhabi Cor-niche bus stop with my friend, Khalid, for almost an hour and there was still no sign of a bus.

“It’s almost sunset and the precious daylight would be gone in another hour or so”, I said in a melancholy tone.

“Don’t worry, Yousuf. We’ll make it to the masjid on time”, said Khalid.

“Humph! So much for my photo adventures”, I replied.

This was the first time I had been to Abu Dhabi and was most eager to take in all the sights in a single day before heading back to Dubai. There were two places I was eager to visit; the Emirates Palace and the Sheikh Sayed Masjid. Since I had already accomplished half my goal, I was eager to get to the masjid to complete my photo adventures.

The bus finally came but it was full; the driver didn’t even bother to slow down. After another 15 minutes, we finally managed to squeeze in on the second bus. This particular bus took us to the terminal and we switched buses; it was just 10 minutes to sunset and time was running out.

Generally, the masjids have poor night-lighting and I was positive the photos would come out pathetic. My stomach lurched from anticipation as the bus moved towards our destination, the pessimist in me taking full control of my mental faculties.

Fortunately for me, I was dead wrong!

The entire masjid was bathed in what looked like blue clouds clearly being projected from strategically selected locations. Since time was precious, I could only spare a few moments to admire this man-made spectacle. This right here is one of the first decent photos of the masjid I took after I got off.

Breathing a sigh of relief, I walked into a long and winding driveway. I was breathless, not from the long walk, but from what lay in front of my eyes. I cannot convey the awe I was in into words. I was so taken by this location that I went back later to take more shots. Here’s one that has been treated to highlight all the gold. Take a look for yourself.

As it was time for Maghrib prayers, we asked for directions to the ablution area. I was struck, not by the size, but by the sheer extravagance of the interiors. Everything from the brightly colored wall murals to the detailed carvings on the ceilings and the domes was perfection, and a sense of serenity set in on me, as it should when you walk into a place of worship.

The carvings on the ceiling 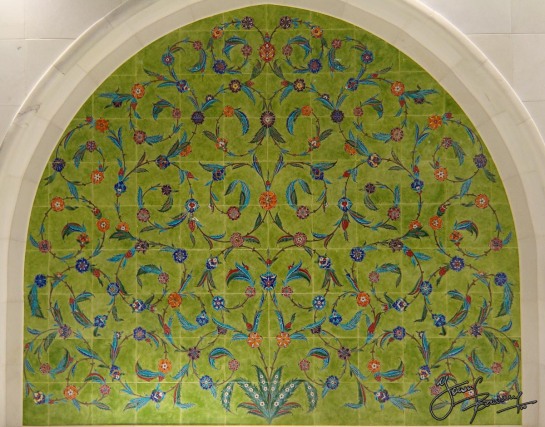 Coming to the ablution area, I was taken by the uniquely styled ablution stations. These were undoubtedly the best ablution stations I had ever seen as they took into account the comfort of the worshiper.

After we were done with our ablution, we started walking towards one of the smaller prayer chambers. As we walked through the arches, I couldn’t help admiring the perspective of depth they so elegantly created. 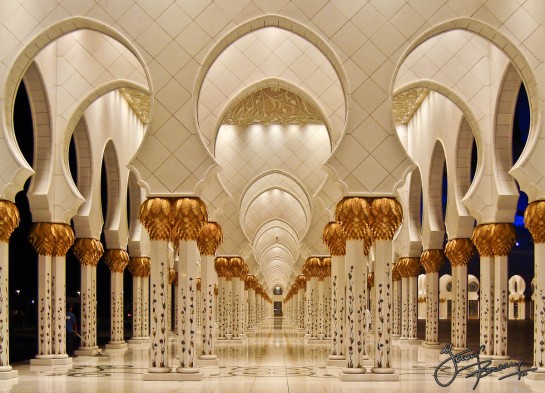 After my prayers, I stood up and looked around me. The stained glass work on the windows was nothing short of spectacular. 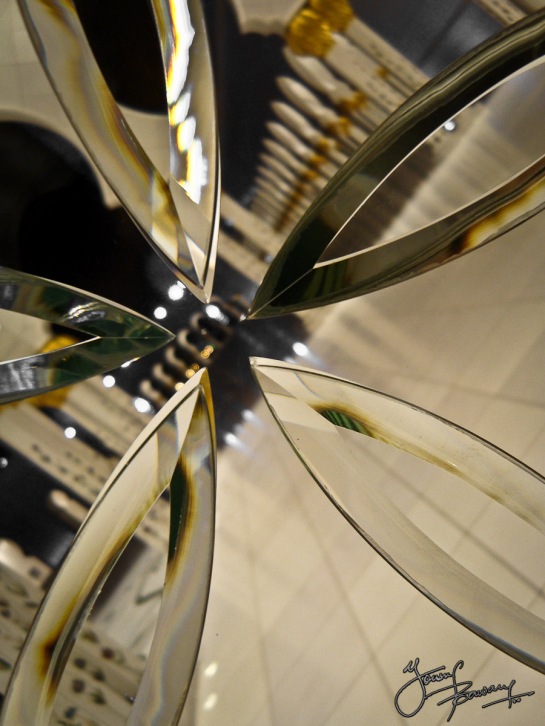 We came up to a door that led to the entrance area that further led to the main prayer chamber. All the walls were covered in embossed floral patterns. A grand chandelier took center-stage and was undoubtedly the most note-worthy piece in the room. 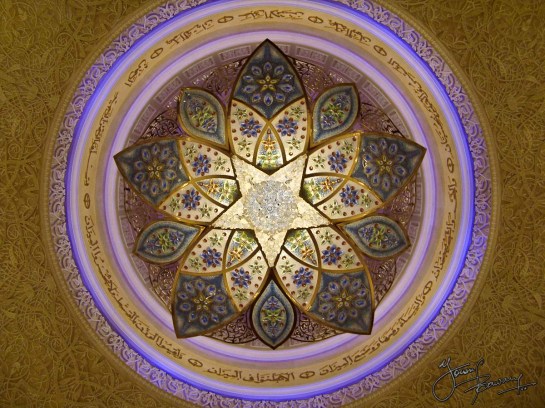 After soaking in all the extravagance, I could not wait to see what the main prayer chamber looked like; I was not disappointed. The minbar (area where the imam stands for prayers) couldn’t have been more gorgeous. The entire wall was selectively back-lit with white lights and covered the 99 names of Allah in a mesmerizing floral structure. The waxing and waning of lights only added to the magnificence I beheld.

When it came to domes and chandeliers, this masjid did not disappoint. right in the center was the biggest chandelier I had ever seen. The dome within which it was set was equally impressive.

Out of nowhere, a guard appeared and requested everyone to leave the main chamber, as it was almost time for Isha prayers. I couldn’t resist myself from taking a photo of the chamber as the doors were being closed.

As we had had a long day, Khalid was too tired to further explore the masjid with me. I left my backpack with him and camera in hand, ventured out to the central courtyard. It was here that the true size of the masjid was revealed to me.

This masjid reminded me of the great Badshahi masjid in Lahore, Pakistan in so many ways. The way the courtyard was laid out to the domes on top, I could see strong influences of the Mughal architecture with inspiration from other Islamic styles, of course. As I only had about 20 minutes before Isha, I tried my best to capture the essence of the masjid as much as I could.

After our prayers, we reluctantly headed back out, but not before taking a few more photos of the reflected arches.

Right outside the masjid was the final resting place of Sheikh Zayed bin Sultan Al Nahyan, the visionary behind this massive project. I said a quick prayer for him and with one final look at the beautiful masjid, started walking towards the bus stop. 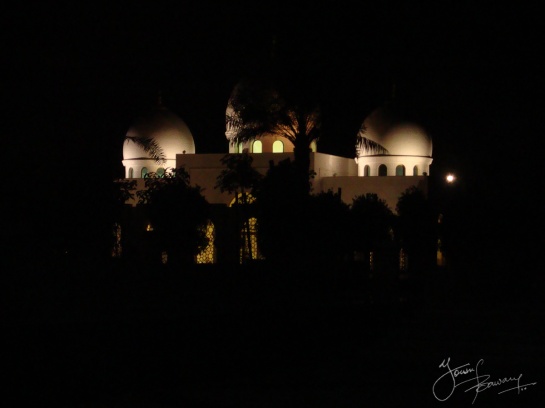 Here is a complete gallery of my favorite shots from the trip; hope you enjoy them. 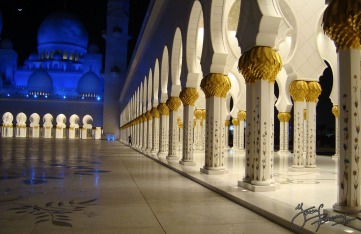 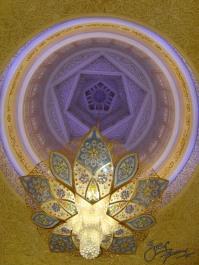 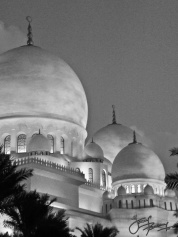 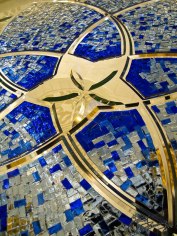 The date tree-inspired pattern on the pillars 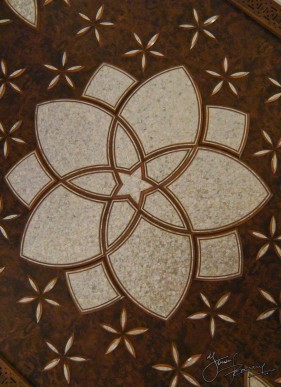 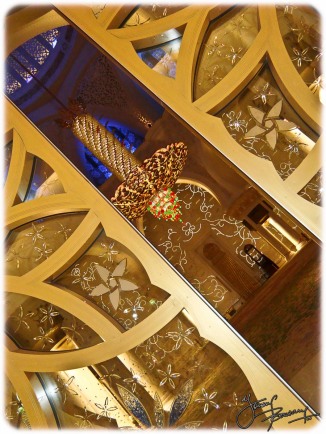 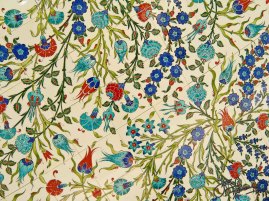 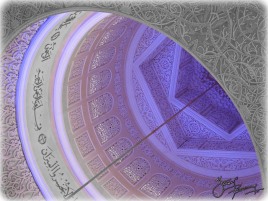 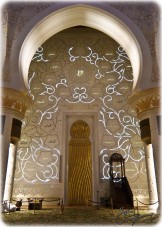 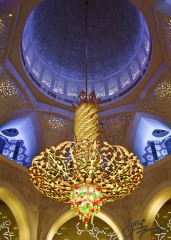 Emboss pattern on the walls 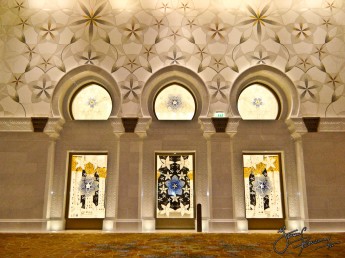 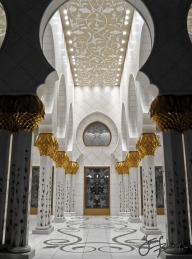 To thee I belong

A close-up of the ceiling pattern

This here is an account of my personal experience. For more details on the masjid, you can visit the Sheikh Zayed Masjid page on Wikipedia. 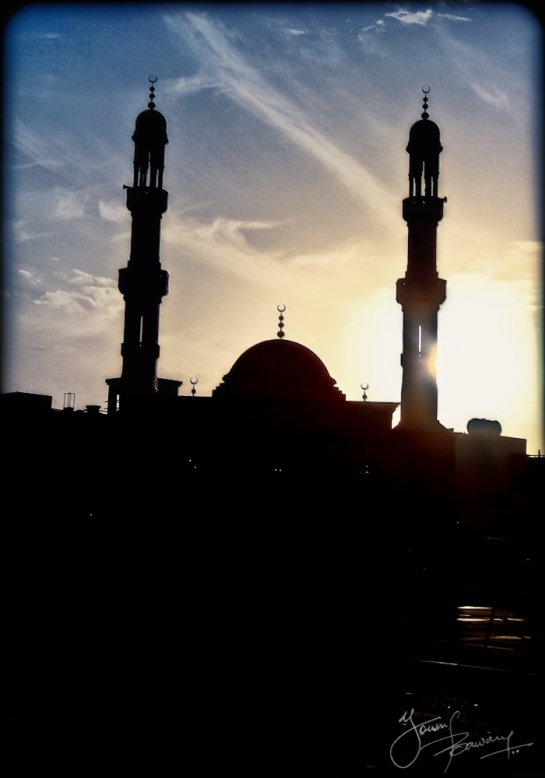 Silhouette photography can be a whole lot of fun. Not only are these photos great to look at, but also seem to have an aura of mystery and drama surrounding them. I recently posted some of my best silhouettes and I had to go back to my image library to find one that I hadn’t already published. This is what I could come up with on such short notice. Hope you like it.