Complacency is overrated! You need to stretch yourself & get out of your comfort zone to unleash your creative potential.

Here’s a peek at my first ever videography project submitted as part of a competition arranged by IBIS hotels and Nikon MEA. Appreciate if you can like and share the video at this Facebook link and/or this instagram link. Constructive criticism is more than welcome. Cheers!

Shot on a NIKON Z6. #ZDifferently 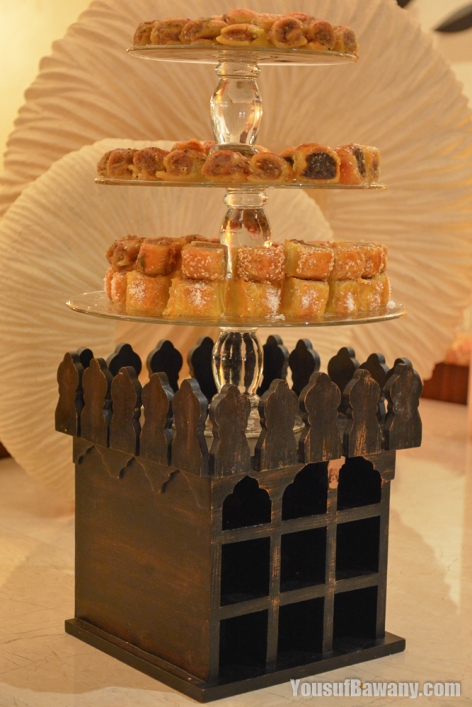 Passion is at the center of our very existence and without it, we’re nothing but empty shells lying at the bottom of the ocean, moving only when the undercurrents deem it necessary.  Some find it in painting, some in music, and others in pottery, but there is only a handful crazy enough who attempt to attain the heights of culinary ecstasy. The BBC Good Food (Middle East) Blogger’s Masterclass event held at the Al Ghurair Rayhaan by Rotana (Dubai) introduced me to three fellow individuals, striving to reach gastronomic perfection against all odds.

Excited that I was to attend this event, it was no surprise that I was one of the first few people who registered for the event. The lady at the registration desk handed over three cards to me and I had no clue what these were for. They had the names of the bloggers that were cooking for us along with the dishes/course they would be showcasing. The immaculate Shayan restaurant was our first stop. I could instinctively get a glimpse of Persia, in accordance to the cuisine that the restaurant serves, with tasteful traditional Islamic, modern and Persian artifacts placed around the area; the bold fabric swatches only added to the rich and elegant ambiance. I found myself a rather comfortable sofa suited to a man of my girth, and shortly after being served some interesting drinks (the Hibiscus Iced Tea was, by far, my favorite), we were led to the Liwan restaurant. 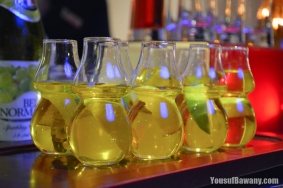 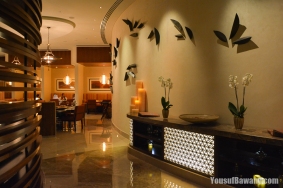 Liwan is Rotana’s International All-Day Dining restaurant and the energy there was palpable; an interestingly placed wooden cart with Indian spices particularly caught my eye. Since we had started fashionably late, the restaurant had already started filling up with hungry diners. We were asked to stand around the large (and by the looks of it, very well-equipped) open kitchen where Sudeshna Ghosh, the BBC Good Food magazine’s editor, formally kicked off the event. Apparently, this masterclass was also a competition of sorts, where the winning dish was to be added to the Ramadan special menu at Shayan. The three cards we were handed at the reception were for voting purposes.

The first chef on the hot plate was, surprisingly, my namesake. A marketing professional by day and an aspiring chef by night, Yousef Tuqan is the proud owner of the video-blog www.middleeats.tv. He took us through the deceptively simple science of cooking a perfect Musakhan Roll, his own gourmet take on the Jordanian/Palestinian dish which is traditionally served over hot taboon bread. Served with a dollop of cold yogurt, these moderately spicy rolls are a perfect starter for your next dinner party. 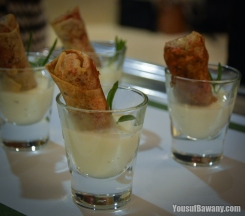 Farah Sawaf, our next master chef, enjoys cooking with a manicure, as much for her fans as for her family. It’s surprising how she manages to maintain an amazing blog with three children (one of them being her husband) in the house. Farah took us through the process of cooking the complex Zaatar Potato Red Snapper Rolls. Generally, healthy and crunchy is a combination that’s difficult to find, but Farah made it look so effortless. Too bad I didn’t get a chance to taste her dish, and in the spirit of fairness, I relinquished my right to vote.

The final chef for the night was Ritu Chaturvedi, an art teacher at a special needs school and chef extraordinaire. Her fuss-free cooking blog is filled with detailed accounts of her culinary escapades and speaks volumes for her love for food. Of the three dishes prepared that night, Ritu probably had the most difficult task since Baklava is something most people are familiar with, thereby making the audience a harsher judge. She presented a variation of the traditional Baklava showcasing carrots and pistachios, and even though the filling was simple, the layering was impressively intricate. 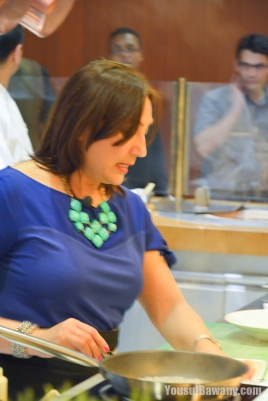 All the three chefs managed to keep the audience engaged throughout the course of the event and even though Yousef won the competition by a landslide, all three of them won the audience’s hearts. It was an honor meeting these three outstanding people, my fellow travelers on this gastronomic journey, who follow their taste buds, their nostrils and their hearts to create mouth-watering recipes for the world to enjoy. Note: A special thank you goes out to Ferry Trinidad, the e-Commerce Manager at Al Ghurair Rayhaan and the mastermind behind this spectacular event.