What is it with the full moon and women? Even my two-year old daughter goes crazy when she spots it in the night sky.

I don’t necessarily get infatuated by the moon in general (unless it’s the moon signifying the start of Ramadan or Eid), but the full version does have some effect on me; I can’t say how or why, but it just does. There is something so serene, so tranquil about the unadulterated light that I just seem to get engulfed by it, losing all sense of time and space. Once a month, I get to appreciate Allah (God) and his glorious ball of stone that steals light from the other glorious ball in the sky (i.e. the sun; duh?).

This phenomenon affects the tides at sea too, which can be found waxing and waning with the phase of the moon, like star-crossed lovers, sighing, knowing they can never be together, yet yearning to meet. There’s actually a lesson, a moral, if you may, hidden somewhere in the last sentence that roughly translates to, “Never give up!”. As far as humans are concerned, I have failed to find any scientific evidence of the full moon’s effect on us or how we behave, although some facts confirming men turning into wolves would be cool (Aaoooo!!!).

I have, however, come across several literary references to the moon and its association with romance, and I couldn’t help put those into perspective as I was driving home the day-before-yesterday. Try as I might, I couldn’t help but admire the dramatic scene unfolding in front of my eyes, the moon interacting with the altocumulus clouds, (yay, Wikipedia!) turning the night sky into a spectacular light show. So as soon as I got home, I grabbed my camera and tripod, rushed to the balcony, set my gear up and starting shooting, much to the annoyance of my beloved wife.

Never in my life have I missed having a telephoto lens as much as I did that particular night. Here are a few images I took from my regular lens and even though the moon looks like a white blob in most pictures, the photos seem to capture the essence of the night pretty neatly. I tried playing with a lot of camera settings and this was perhaps my first ever shoot on manual settings. The photos could have come out better had I invested the time and effort into photo-shopping them, but with two kids (the elder one being two years old), time is a commodity I’m always running short of.

I particularly love the one when the moon hides behind the veil of clouds, partly visible but mostly hidden. It just seems to add an aura of mystery and a hunting beauty to the entire scene. Enjoy! 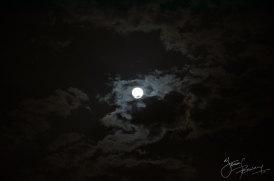 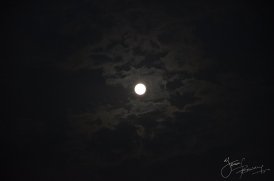 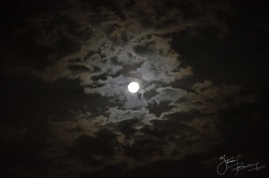 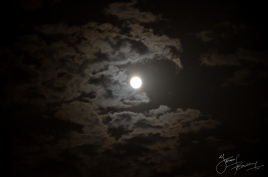